Effectiveness of the first purification stage of a blast furnace dust catcher, operating at gravity principle, currently does not exceed 40 – 50%. It catches only the largest dust fraction (> 100 microns).

Existing sludge dewatering and disposal technologies are difficult and expensive, require large areas for sludge thickeners and sludge dumps, as well as significant operating expenditures that affect production profitability. The costs related to sludge disposal (handling, dewatering, etc.), even with the existing law efficiency dewatering system at the factory, are 8 to 15 times higher than the costs of dry dust disposal.
Currently, the operational efficiency of gravity dust catchers does not exceed 40 – 50%, which is clearly not enough both for the efficient operation of the entire blast furnace gas cleaning system, and for the efficient  production waste (sludge) disposal.

Analysis of design features of the existing blast furnace  dust catchers has shown that they have all necessary conditions for upgrading them to combined inertial-cyclone-type units, the efficiency of which, by the output dust content in gases is much higher than the existing one.

The collected dust settles in the bunker part of the dust hopper, from where it is periodically forwarded through the existing dust-removal system to the consumer (sinter plant).

According to calculations, by the degree of dust collecting of the upgraded  dust catcher at the level of 90%, the output of sludge from wet cleaning stages is reduced by 3-4 times and makes ~ 15-20 t / day from one blast furnace.

At that, the zinc content in the sludge increases proportionally and can reach (other conditions being equal) 20-30%, which allows its efficient use as a commercial product for zinc production. In any case, the iron content in this sludge will be significantly reduced, and its disposal in the own production is unpractical.

This sludge should be taken out of the production cycle, and it will effectively remove zinc from the turn-over, prevent its accumulation in circulating products and stabilize the situation. Moreover, as a result of the dust catcher modernization, the amount of Zn-containing sludge that needs to be taken out of circulation will sharply decrease (3-4 times) and iron losses will be minimal. 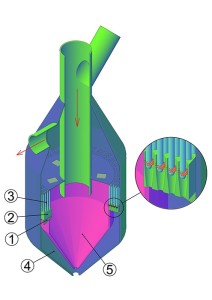